Green electricity prices for your Church

This means there are no longer large premiums for green electricity. This helps churches to be more sustainable. Many energy companies are now investing in renewable energy. We work with over 30 energy suppliers, and many of these have agreed exclusive green energy tariffs for our church customers. Along with standard electricity prices too.

How times have changed.

Electricity prices started rising slowly, and simply became more volatile. So much so that they have risen every month since May 2016 for nearly 3 years. The electricity market is a complicated beast, with a multitude of factors working together. However, we have outlined the main protagonists below.

Unfortunately, with North Sea gas reserves falling, the UK is importing much more gas from abroad. This is mainly in the form of Liquefied Natural Gas (LNG) which arrives in enormous tankers, and comes at a premium.

Once committed to nuclear power, the UK government is finding it difficult to get the investment to build new reactors. The trouble is, our current reactors are nearing end of life, and simply need to be replaced. Nuclear power accounts for around 25% of the UK’s electricity generation. Therefore we are importing more electricity from mainland Europe.

The price your church pays for each kWh of electricity, can roughly be split in half. One half is the wholesale price, the other half consists of network and distribution costs.

Suppliers are charged by the Grid for the use of the infrastructure that transfers energy to homes and businesses. These charges contribute to maintaining and operating this complicated system. These prices are updated every April.

Government levies are mainly green schemes to encourage generation of electricity from renewable sources. See a list of the main distribution charges and levies here. They have risen from 35% of the price of a unit of electricity, to nearly 50%. And are predicted to increase further.

Church water bill
Get electricity prices for your Church 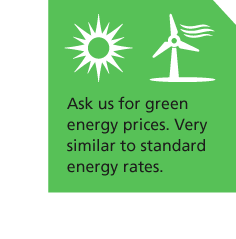 However, the green premium is so much lower than it used to be. In fact, there is often little difference these days between the two. Given that churches use a relatively low amount of electricity (compared to gas for example), choosing a green electricity tariff won’t necessarily mean a big leap in the annual cost.

Our green church electricity prices are only around 0.2p – 0.6p higher than standard electricity tariffs you may see. And bear in mind our standard prices are often considerably lower (through our buying power) than most. Going green could even save you money. At worse, add a little to your annual bill.

VAT on Church utility bills
Get electricity prices for your Church

Sustainable Churches across the UK

An obvious benefit of choosing a green electricity tariff for your church, is your pledge to help the environment. Going green reduces the carbon footprint of your church.

Once you make the decision to opt for green church electricity prices, your church immediately becomes more sustainable. As an organisation at the heart of the local community, the church will be setting an example, hopefully for others to follow.

By choosing a green electricity contract for your church, you are investing in the generation of renewable electricity over fossil fuels and nuclear power.

A common question! Green electricity is produced from renewable sources including wind, solar and tidal. This is then fed into the grid along with electricity from other sources. By ‘going green’ you are helping to fund more generation of renewable electricity, instead of fossil fuels, so helping the planet and the environment.

Church water bill
Get electricity prices for your Church

For green (or standard) electricity prices, call Perfect Clarity on 020 3372 6517. We also provide exemplary service throughout your contract.

"I would like to say a huge thank you for your help and professionalism in the way you have helped our church switch to a better energy deal. You were fast, efficient and polite."

"Perfect Clarity are an absolute boon for our business. They have saved us a lot of money by finding the cheapest rates. Excellent and prompt service."

"Perfect Clarity were recommended to us and we found them to be a godsend in helping us find the best deal. Our account manager, Kevan, has always been quick to respond to any questions that we have asked."

"It has been fantastic to work with Perfect Clarity over the past two years. Perfect Clarity have not only worked hard to secure the best deals for our charity, they has also provided excellent subsequent support and advice."

"Our account manager Kevan is a delight to deal with, and I cannot recommend this company more highly. I am always pleasantly surprised when I open my bill each month. I know that if I need something sorted I have Kevan’s direct line which is amazing client service."

"Perfect Clarity are really on the ball. I set them the goal of getting us a longer term contract whilst keeping the costs low and they definitely rose to the challenge! Very helpful and communicative."

"Perfect Clarity found us a fantastic deal for our energy supplies, and took all the hassle away from us. I cannot recommend this company high enough. Thank you for all your help."

"Using the services of Perfect Clarity should be a no brainer for any business. They take the hassle out of renewing your energy contracts whilst ensuring that you get the best possible rates. I highly recommend you try their services – they can save your business both time and money!"

"Perfect Clarity have taken all the stress out of changing energy suppliers. A free service as well as reduced costs. I highly recommend their efficient and professional services."