Like many business owners, Jenny was working on her business on a daily basis, and took her eye off the cafe energy costs. The electricity contract cost Jenny £4,430 a year. For the next contract, our exclusive prices reduced the annual electricity costs by £650, locked in for 2 years. We also helped with the gas contract, saving £210 off the £1,060 annual costs. The lower cafe energy prices saved Jenny over £860 a year. 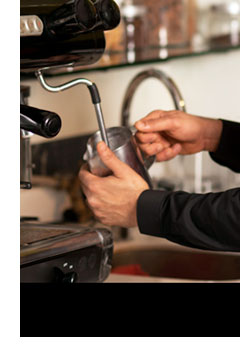 Clarity for your café energy prices

Café energy prices form a large chunk of your overall business costs. A cost you clearly need to keep on top of. Without careful management, your energy prices can increase more than necessary and have a negative effect on your business.

Perfect Clarity help cafes up and down the country.

We check energy prices from over 30 energy companies. Our buying power in this energy market often creates exclusive prices for our customers. We make recommendations to our café customers for different contract terms.

We also manage these contracts, and are always looking ahead to the next one. You can expect an email or call when prices are looking favourable for the next contract. This can result in energy savings of £200 – £400 per year, compared to leaving your contract renewal until the last minute.

Submit a short form for your bespoke energy prices

A café in Cornwall contacted us via social media, asking for help with their energy contracts. They knew when the individual contracts were due for renewal, but didn’t have the time or inclination to get prices in from a range of suppliers. Like most business owners, they were not aware of the large number of energy companies who supply gas or electricity to business premises – too many to work through themselves. We did all this for Hugo, and he also benefited from our exclusive cafe energy prices, saving several hundred pounds on their business energy costs.

I found Kevan and Perfect Clarity through Twitter, quite by chance and just as I needed to start the infuriating process of sorting out three electric and one gas contract. The process was incredibly easy and such a weight off my mind, as well as saving me hours of desk work, it saved me money. I’m a convert!

Andrew’s café had a modest electricity use, even so, £2,260 is a large cost for a small business like this. We switched Andrew’s electricity supply to a different provider with cheaper cafe electricity prices.

Andrew mentioned to us that the current supplier kept calling him with lower and lower prices, but they didn’t get close to the prices we quoted. The reason for this, is that Andrew has the buying power of the electricity used by his café. We have the buying power of cafés up and down the country, and thousands of other businesses as well. Add their electricity use up and that becomes a great lever to negotiate much lower cafe energy prices.

Saving of £950 per year on cafe energy prices

Kate runs a cafe in south London. The electricity contract had renewed automatically for some years, which meant the price she was paying went up a hefty amount every 12 months. Kate called us when she received the latest renewal notice from E.On and the cafe electricity prices quoted here would have cost Kate’s small business £2,700 in electricity for the coming year, even with a Direct Debit discount.

She called E.On to get a better price, which they duly delivered. However, it didn’t match the prices we get from suppliers with our buying power in the energy market. As such, we switched Kate to another electricity supplier on a 2-year fixed rate of 10.99p per kWh, and she saved £950 a year on her cafe energy prices.

When you move premises, make it a priority to commit to a fixed price contract.

We met Ash at a business conference and he asked us to look at the electricity bills at his new cafe for him. Since he had been so tied up with the lease and setting the business up, he hadn’t got round to this yet. Luckily it had only been a few months that Ash had taken over the tenancy, as the incumbent supplier was charging ‘deemed’ or ‘out of contract’ rates. These rates are often very close to double the standard rate charged by suppliers.

If these prices had continued for a full year, the cafe electricity prices would have cost around £6,500 in electricity bills. To save Ash incurring more excessive costs for another 4 weeks (roughly the time it takes to switch supplier) we got his café on a 1-year fixed price contract with the current supplier at the site. This meant the price dropped immediately, saving nearly £3,000 for the rest of the year. Later in the year, we switched the business to a longer term contract with another supplier.

"I would like to say a huge thank you for your help and professionalism in the way you have helped our church switch to a better energy deal. You were fast, efficient and polite."

"Perfect Clarity are an absolute boon for our business. They have saved us a lot of money by finding the cheapest rates. Excellent and prompt service."

"Perfect Clarity were recommended to us and we found them to be a godsend in helping us find the best deal. Our account manager, Kevan, has always been quick to respond to any questions that we have asked."

"It has been fantastic to work with Perfect Clarity over the past two years. Perfect Clarity have not only worked hard to secure the best deals for our charity, they has also provided excellent subsequent support and advice."

"Our account manager Kevan is a delight to deal with, and I cannot recommend this company more highly. I am always pleasantly surprised when I open my bill each month. I know that if I need something sorted I have Kevan’s direct line which is amazing client service."

"Perfect Clarity are really on the ball. I set them the goal of getting us a longer term contract whilst keeping the costs low and they definitely rose to the challenge! Very helpful and communicative."

"Perfect Clarity found us a fantastic deal for our energy supplies, and took all the hassle away from us. I cannot recommend this company high enough. Thank you for all your help."

"Using the services of Perfect Clarity should be a no brainer for any business. They take the hassle out of renewing your energy contracts whilst ensuring that you get the best possible rates. I highly recommend you try their services – they can save your business both time and money!"

"Perfect Clarity have taken all the stress out of changing energy suppliers. A free service as well as reduced costs. I highly recommend their efficient and professional services."