After months of reduced operating levels, Centrica have finally announced the Rough storage facility to close. Additionally, sanctions on Qatar will no doubt affect us. Close to a third of our imported gas is from this region. On the upside, falling levels of demand during summer months should mean less pressure on prices. We look at these events in our quarterly energy price update.

The Rough storage facility will no longer store gas once the remaining gas reserves have been sold. It has been deemed unsafe to inject additional gas into its wells. This will affect prices in the long-term, as there is still enough gas in the existing field to cover short term supply. Perhaps as early as this coming winter if we have a prolonged cold snap and reserves fall.

There are calls in some quarters for more fracking exploration to replace the lost gas from Rough.

80% of UK homes use gas for heating. To try and reduce our reliance on gas, the government has announced a couple of projects for hydrogen alternatives. They will test if hydrogen is an efficient form of heating, and if existing gas pipes can be used.

How will the situation in Qatar affect energy prices? 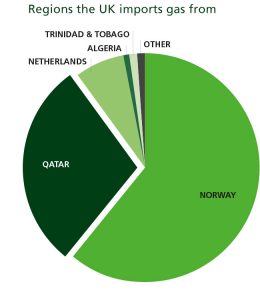 Until the end of the last century, the UK enjoyed plentiful North sea gas reserves. But with these reserves falling steadily, we now import 60% of our gas. This is not helped by the political situation in Qatar. Nearly a third of our imported gas is from Qatar.

Qatar is the world’s largest producer of LNG – Liquefied Natural Gas. However, the transport links for LNG out of Qatar have been halted by Saudi Arabia, the UAE, Egypt and Bahrain. Several ports in the region, but not all, have been closed to Qatari ships.

The National Grid predicts 93% of our gas will be imported by 2040. Therefore any such incidents that affect the transport of gas to our shores will have an impact on prices.

On a more positive note, the 7 June saw a record for the amount of renewable energy generated from wind, solar, biomass and hydro. This also saw wind, solar and nuclear power generating more than gas and coal combined.

Perfect Clarity can help businesses save money on their energy and water contracts. Call 020 3372 6517 for more information.

Green hotel tips. Can my hotel be green AND save money?
Scroll to top